By Fiona McCall on February 23, 2021 in Public History, Research in Focus, Uncategorized

As a naval town, Portsmouth’s history has tended to have a masculine focus.  But many Portsmouth women have actively campaigned for women’s rights and set up practical initiatives in the Portsmouth area to improve the lives of women. A Heritage Lottery Fund grant enabled the setting up of a project to interview these women and capture their stories.  UoP history reader Sue Bruley was one of the project leaders.  Project co-lead Laurel Forster, Reader in Cultural history in the UoP School of Film, Media & Communication explains more about the project and its outcomes.

The main aim of this project was to document the activism of  women in the Portsmouth area by interviewing women from a range of backgrounds and with different interests in community issues. The project, initiated and co-lead by Dr Sue Bruley, Reader in Modern History, of the School of Social, Historical and Literary Studies, worked with the local library, the U3A, volunteers, schools and community groups to unearth and record the impact of feminism and women’s activism.

The project began some years ago with a Women’s Liberation Memory Day, and was followed by a conference in 2014 called ‘Situating Women’s Liberation: Historicising a Movement’. Out of the conference came a journal special issue and a book, edited by Dr Laurel Forster and Sue Bruley called Historicising the Women’s Liberation Movement in the Western World (Routledge 2018). A Heritage Lottery Fund grant made the project possible and the work of the project: interviews, volunteer training, public lectures, touring exhibitions and memory days began. The project garnered a huge amount of support in the city, with over 200 people attending the public lectures and even some artwork to commemorate the project.

Many Portsmouth women who have, since the Women’s Liberation Movement of the late 1960s, actively campaigned for women’s rights and set up practical initiatives in the Portsmouth area to improve the lives of women and their families, came forward. As a Naval Town, with an important Dockyard, the recorded history of Portsmouth has had a particular masculine focus, so it was especially important to record this history. Portsmouth’s own branch of the Women’s Liberation Movement was remembered by many, with its consciousness-raising meetings.

The women of Portsmouth actively campaigned for peace and many stories were told of Greenham Common Peace camps and anti-nuclear demonstrations. Many of our interviewees focused upon the grass-roots campaigning that supported the development of one of the earliest rape-crisis telephone lines and women’s refuge centre.

Others spoke of their work in minority groups within the city, fighting racism and supporting women from all backgrounds. Women working as teachers, city counsellors, faith leaders, or to improve housing conditions for families, have all been interviewed. There are accounts of women’s pioneering work in the Royal Navy and elsewhere in local factories, offices and the university, campaigning for equal rights at work.

All these stories are captured in the project booklet and stored in the archive in the city Library’s History centre.

For further information on the project see the many resources on the project website. These include a learning resource pack suitable for using in teaching ages 14-18 and a bibliography. 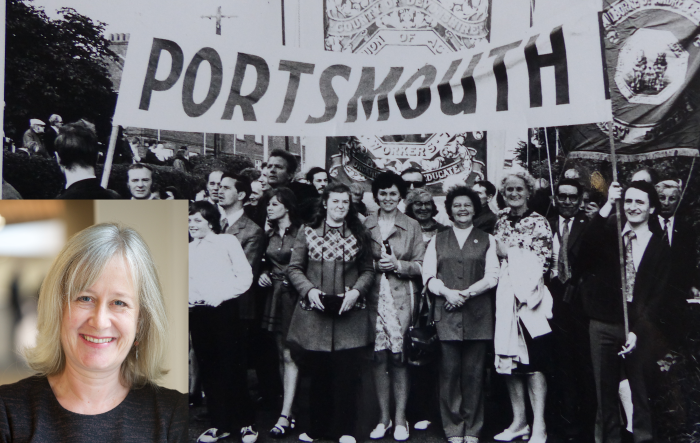 View all posts by Fiona McCall →